Speaker Mike Picard designed and built the Electro-Willys, an entirely electric-powered M38 that takes the concept of a green Jeep to a whole new level. Transforming a 1952 M38 Willys into an eco-friendly daily driver will be the subject of his appearance at the Summer Midwest Willys Jeep Reunion. Attendees will be treated to a chronicle of a fascinating project that began in 2008 partly in response to spiking fuel prices.

“I’ve got about 75 photos and a Powerpoint presentation for the Willys Reunion,” says guest speaker Picard. “I’m going to focus on construction and the phases that the Electro-Willys build went through and I’ll also cover lessons I learned during the build.”

The project was a labor of love, but it was not without its setbacks. “A critical lesson I learned is to make sure that your cables fit together correctly,” he admits. Two years ago, Picard was scheduled to take the Electro-Willys to Alaska with the Military Vehicle Preservation Association (MVPA) Alaska convoy, but he destroyed two motor terminals because the cables didn’t fit correctly. Regrettably, his trek had to be scrapped. “It was a major disappointment because I spent $10,000 to prepare for that trip and with one short it all went up in smoke.”

A triumph for the Electro-Willys was when Picard made the switch from a lead acid battery pack to a lithium one. “I doubled the distance I could drive and added 30% onto the speed I could go,” he says. The lithium battery cost three times as much as the lead acid pack, but Picard believes it was worth it. Weight wise, the Jeep’s battery went from weighing ¾ of a ton to 400 lbs., shaving off over 1,000 pounds.

Picard elected to transform the M38 to an electric vehicle because of its relative simplicity. “I knew I wouldn’t have to worry about power brake features and mechanically it’s straightforward so it makes an easy conversion to electric,” he says. He acknowledges that using 1930s technology in the transmission and drivetrain and a flat windshield gives the Electro-Willys terrible aerodynamics. “I’m about as smooth and sleek going through the air as a stack of bricks,” he laughs.

Still, Picard relies on the Electro-Willys for his daily commute of about 25 miles one way. “I’ve had it up to 75 mph and I can drive faster than 95% of the Willys on the road today,” he says. There’s a place at work where he can plug the Jeep in and it takes 2-3 hours to charge.

Additionally, Picard conducts an annual Colorado Fall Colors Tour in his home state of Colorado. It happens during the last full week of September every year so it coincides with the fall aspen colors being at their peak. He’s delighted that a number of people who are going to the summer reunion have done his tour with flat fender Jeeps driving through the Rockies. “We drive on dirt and gravel roads here in the Rockies and there are some steep grades, rocks and stream crossings to add to the adventure,” says Picard.

Attendees at this weekend’s Midwest Willys Jeep Reunion will be treated to Picard’s presentation, a banquet and plenty of stories on Willys lore. Vendors will be on site and the Willys Nelson Band is performing tribute songs to Willys classics.

David Beran is a Copywriter at 4 Wheel Parts 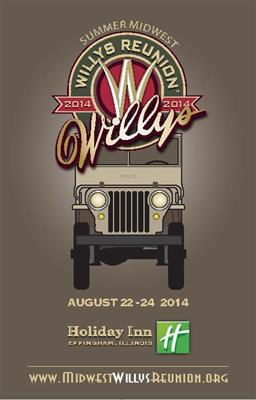